Our Academy held its first ever Enrichment Day today. 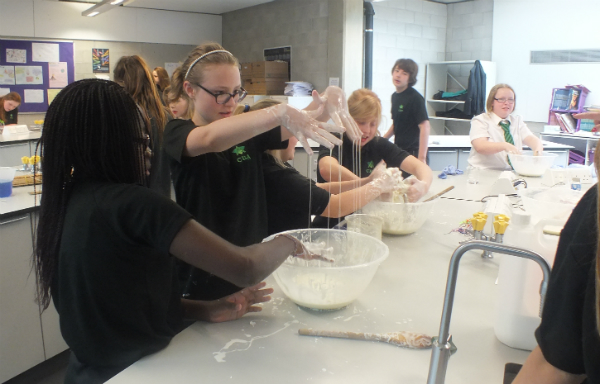 Our Academy held its first ever Enrichment Day today.

The event encouraged our students to develop an interest in a wide range of subjects outside the classroom.

Many of our students went on trips to the London Eye and the Tower of London, Warner Bros Studio Tour of the Making of Harry Potter, LegoLand, Victoria and Albert Museum, Snibston Discovery Park, Twycross Zoo, Duxford Imperial War Museum, Alton Towers and the National Space Centre.

She said: “Enterprise Day has been a huge success. It has given students the chance to try new things and work with different students and teachers.

“In Kitchen Science we have done lots of different experiments with things the students could buy at a supermarket or chemist.

“We’ve done things such as make slime out of PVA glue and borax solution and poured water from one jug to another using only a piece of string.

“The activities we have done have shown them science is easy and accessible at home.”

Assistant Director of Mathematics Maxwell Sam was involved in planning the Mathematical Challenge in school.

He said: “We decided to do a Mathematical Challenge because we thought it would be a fun way of bringing mathematics to our students.

“We ran a variety of activities, including a Treasure Hunt, building a Battleships board game, the Mangahigh maths challenge and a sports competition where the students had to find the mean score of groups.

“The students also took part in a Maths Rap competition in which they were given mathematical keywords to make a rap.”

Mathematics Teacher Mitch Prior ran a session in which students pretended to be bees collecting honey which taught them about different ways to communicate and about the natural world.

Students also used Raspberry Pi’s to learn about computer programming. The devices were donated to the Academy by RS Components.

Active Teacher James Aston helped to organize the sporting events at the Academy.

He said: “We ran a variety of activities, including a Basketball Academy and a Dance Camp.

“It’s the first time we have done anything like this and it was a great day.”

Students in the Dance Camp choreographed a number to the song Let It Go from the Disney film Frozen which will be performed in our Summer Dance Recital.

Dance Teacher Francia Dickinson said: “The students have been learning a motif that they are going to develop. They have been looking at the imagery in the song to inspire them. They have all worked together very well.”

Media Teacher Tim Hawkins was involved with the session on Exploring Creative Media.

He said: “The students have been looking at persuasion and influence in the media.

“We have been doing neuro linguistic programming and investigating micro facial expressions.

Our students in Unit used the event to prepare for their visit to Stanwick Lakes the next day.

They made sausage rolls, gingerbread men and fruit jellies for a picnic and created flags and a brightly coloured table cloth.

They also took part in a team exercise to stop water leaking from a tube with holes in it.

The students who went on excursions during the day also had a great time.

Textiles Teacher Abbie Parsons accompanied a group of students on the Warner Bros Studio Tour of The Making of Harry Potter.

She said: "The students had a magical day. They were amazed by the props, costumes and life-size sets that were used in the films.

"The students had the opportunity to be photographed in front of a green screen on a broomstick and even taste Butterbeer."

Restaurant Manager Chris Lapsley and his team also did a barbecue at lunchtime as a special treat for the students taking part in activities at school.