A company made up of young entrepreneurs from Year 9 has been awarded a top business award by respected professionals. 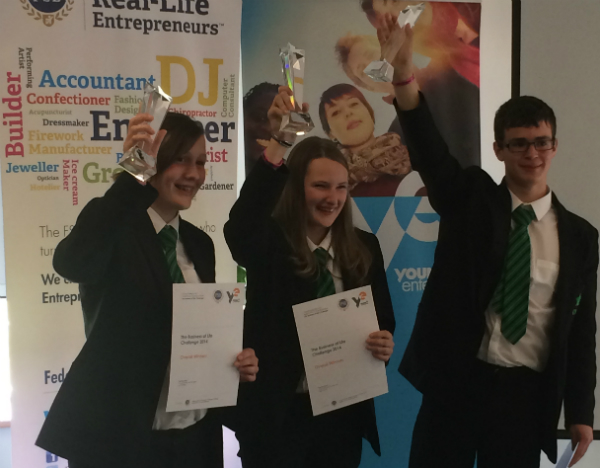 A company made up of young entrepreneurs from Year 9 has been awarded a top business award by respected professionals.

McGivernU won the the Young Enterprise and Federation of Small Business Award for the Business of Life Challenge 2014 with their design for an app which teaches people how to play different instruments.

The final took place last week in Leicester and in total three companies from Corby Business Academy, including McGivernU, made it through to the last stage of the competition.

McGivernU member Gareth De Beer said: “We created our app to help people to learn any instrument and I can’t wait to make our product for real.

“We had great fun at the final and I was delighted to see most of the other teams which had made it through were also from our Academy.

“I would have been happy if any team from CBA had won and I was absolutely elated when our team came first.

“On the way home in the minibus we were singing and dancing because we were so thrilled to have won.”

CBA’s Young Enterprise Link teacher Alex Allan said: “The finalists were judged by professionals upon their business idea, research, costings, creditability and the viability of their product.

“They were also judged on the way they lived and breathed their idea.

“We had three teams in the final and one of our other teams, called Blend, came joint top in the Innovation and Young Enterprise tier.

“I look forward to seeing both companies’ products being made available in the market and the teams getting the chance to develop their companies.

“All our finalists were a credit to our Academy.”

(Pictured are members of McGivernU with their awards)