An exciting performance poet who has appeared on television and radio worked with a group of our Year 8 students. 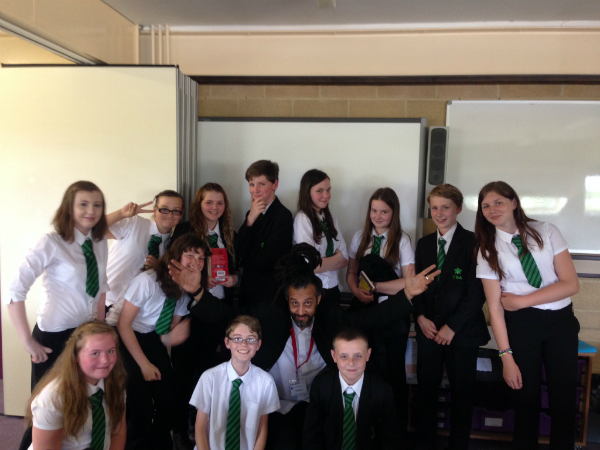 An exciting performance poet who has appeared on television and radio worked with a group of our Year 8 students.

Dreadlock Alien – also known as Richard Grant – spent time with 12 of our students during a visit to Brooke Weston Academy.

CBA Librarian Amy McKay accompanied our students on the visit.

She said: “He was very entertaining and made poetry fun for the students.

“He did a rap containing their names and the students did some work on rhyming words and wrote poems.

“One of our students, Laurie Coleman, won the young writer of the afternoon competition with his poem.

“Students from Corby Technical School also went to see him and I think it was another great example of schools within the Brooke Weston Trust working together to ensure the money we spend benefits as many students as possible.”

(Pictured are our students with Dreadlock Alien)

It’s the people’s republic, its name is Syria,

All the war over there it’s a human Siberia.

All the rebel fighters, it’s their last stand.

The ruler over there he just wants to meddle,

The mothers, the children, they have no defence

Separated only by class and a barb wire fence.