Christmas Concert is a hit with audience

Our talented bands and singers performed in front of a packed auditorium at our Christmas Concert last night. 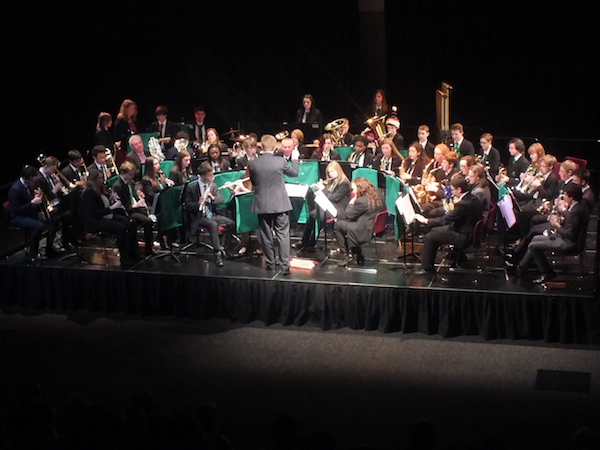 Our talented bands and singers performed in front of a packed auditorium at our Christmas Concert yesterday.

The show included a variety of popular Christmas numbers, including Have Yourself a Merry Little Christmas, Jingle Bells and Rockin’ Around the Christmas Tree, classical music and contemporary numbers such as Somewhere Only We Know.

Director of Music Clive Wears said: “It’s been a tough term and the Christmas Concert was a lovely way to end the term on a positive note.

“It was fantastic for our students to once again perform to a packed theatre. We really appreciate the support we receive from our students’ families and the community.”

Among the guests was Corby Mayor Cllr Anthony Dady.

He said: “It’s been great to see the enthusiasm and the talent here and to see how the teachers are working so hard to get the best from their students.

“It’s also wonderful that the concert is so well supported by parents.

Julie Mallinson attended the concert to see her grandson, Ben Wheatcroft of Year 7, perform with the Samba Band.

She said: “It’s been a really good concert and there’s a great atmosphere.

“I’ve enjoyed the mix of music on offer tonight and I was really proud to watch Ben perform.”

He said: “I’ve really enjoyed it and I particularly liked listening to the Christmas songs.”

Michael Willmore and his family attended the concert to see Year 9’s Louie Anderson take part in the concert.

He said: “I thought the concert was really good and I particularly enjoyed the CBA Big Band’s performance of Valerie.”

The soloists on the evening included singer Bobbi Devlin and violinist Lucy Hall and a duet, made up of Eloise Robertson and Callum Connachie, performed Fairytale of New York.

Eloise said: “I really enjoyed performing in front of a live audience and the atmosphere backstage was great.”

There were also performances by our new CBA Big Band which was launched in September.

Today our musicians performed a selection of music from the Christmas Concert at assemblies for all our students.

To see more pictures from the Christmas Concert click here

(Pictured is our Senior Concert Band performing at the Christmas Concert)