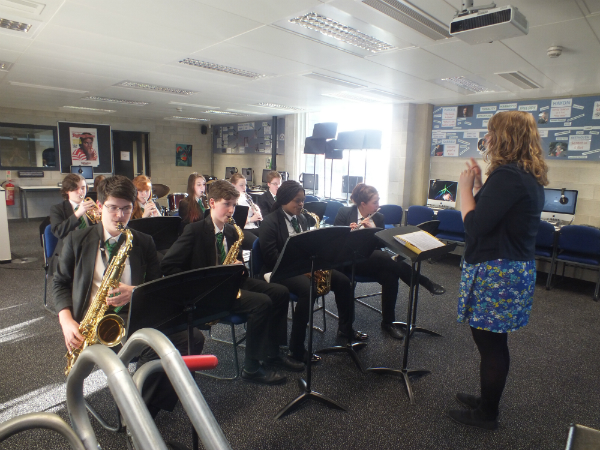 The event was held to mark former Corby Mayor Cllr Anthony Dady’s final weekend in office at the end of May and it featured a variety of performers from across the borough, including the CBA Jazz Band.

CBA Director of Music Clive Wears said: “We were honoured to be invited to perform at the concert at The Core at Corby Cube.

“We were pleased to support the Mayor and help him raise money for his charities because during his year in office he supported us and often attended our concerts.

“Our performance was very well received and the concert gave our students a great opportunity to perform in a professional theatre.”

Our band performed Pharrell Williams’ Happy, Miles Davis’ So What, Madness’ One Step Beyond and The Zutons’ Valerie.

After the concert Cllr Dady wrote to Mr Wears to express his thanks to our students.

He said: “A huge heartfelt thank you to you and your students for your performance.  It was wonderful!

“I very much appreciated you all voluntarily giving up a Saturday evening.

“It was amazing to have you perform and be part of my Civic Celebration.”

(Our Jazz Band is pictured during rehearsals)