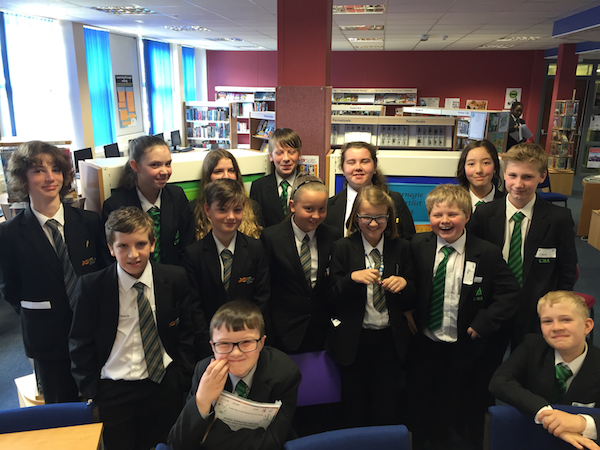 Club members read the 15 books shortlisted for this year’s CILIP Carnegie and Kate Greenaway Book Awards and were invited to attend Corby’s annual celebration of the contest at Lodge Park Academy earlier this month.

CBA Librarian Amy McKay, who was also the national co-ordinator of this year’s awards, said: “Our students attended the celebration with students from our fellow Brooke Weston Trust school, Corby Technical School, and it was wonderful to see how well they all got on. There was a true feeling of unity between the Trust schools.”

During the celebration the students took part in a number of activities, including quizzes and a Book Push contest where the students had to argue why their favourite book should win the award.

CBA’s winner was Year 7 student Lola Zukhurova who argued the case for Apple and Rain by Sarah Crossan.

This year’s Carnegie and Kate Greenaway winners were announced on Monday.

Miss McKay was at the awards ceremony in London and our students were given the chance to watch the ceremony at CBA at lunchtime.

She said: “Half of the students were very excited about the winners and the other half were very vocal about who they thought should have won. This is great because it shows they have understood the awards criteria and are passionate about the books they have read.

“They made a video of themselves watching the presentation which they sent to me at the awards ceremony so I could show it to people at the event.

“The Carnegie awards are the professional highlight of my year and I am so lucky that CBA gives me the support to be a part of it.

“Our Academy definitely benefits from my Carnegie role because it enables me to make connections with fantastic authors.”