Our bright young linguists have triumphed in the final of a national foreign languages competition. 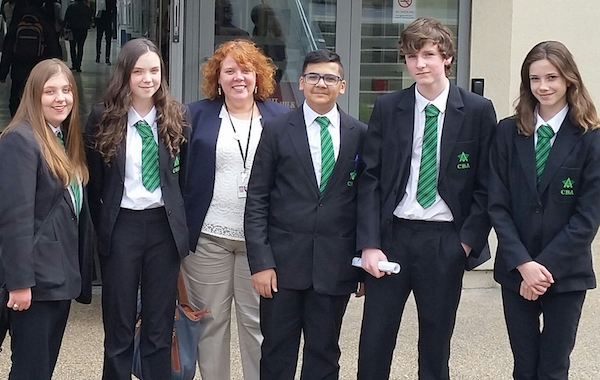 Our bright young linguists have triumphed in the final of a national foreign languages competition.

Six Year 9 students took part in Routes Into Languages’ first ever Translation Bee competition at Anglia Ruskin University in Cambridge and performed very well in both Spanish and French.

The demanding competition required the students to translate complex phrases into three tenses.

CBA Director of Modern Foreign Languages Karen Turney said: “It was a great privilege to take part in the competition and our students were excellent ambassadors for the Academy. They had been preparing for the competition for several weeks,  with the help of our foreign language assistants Claudia Tapia Villa and Alexandra Estebe.

"The aim of the Translation Bee is for students in Year 9 to practise and improve a range of important skills such as vocabulary, pronunciation, memory, verb conjugation, tenses and sentence formation. We are very proud of their hard work and determination."

Andy Moisa won first place in Spanish, with Rebecca Sawford and Laurie Colman in third and fourth place. After a nerve-wracking tie-break round, Jessica Icke came fifth in Spanish and Courtney Smith was fifth in French.