Academy celebrates one of its best A Level Results Days

Students at Corby Business Academy are today celebrating one of the best A Level Results Days in the school’s history. 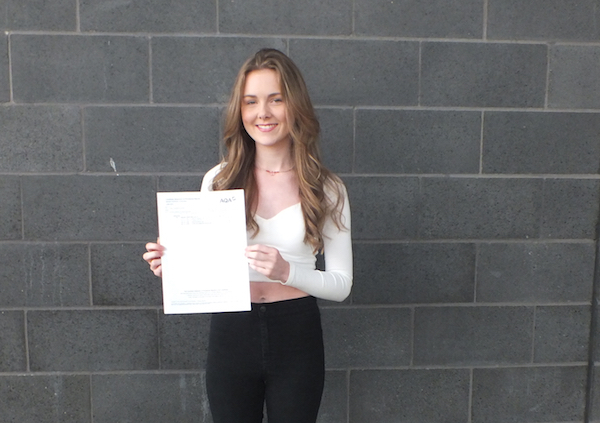 Students at Corby Business Academy are today celebrating one of the best A Level Results Days in the school’s history.

Today’s results show improvements across the board in the school’s A Level and Level 3 vocational qualifications.

The number of students obtaining A* to B grades has also increased significantly.

CBA Executive Principal John Henrys said: “This year we have seen a significant increase in the number of students achieving the highest grades and an increase in the students’ average point scores.

“These results are amongst the very best that we have achieved and they are testament to all the hard work that students and staff have invested in their subjects over the past two years.

“From the results I have seen I would expect that all our students will have met the requirements for their next steps be that a place at university, an apprenticeship or employment.”

Mr Henrys added: “Once again our Business students have performed very well and these results will further strengthen the Academy’s reputation as an excellent centre for Business.”

She said: “I don’t know how to put into words how I feel. I worked so hard but I didn’t expect to do this well.

“I would like to thank all my teachers for helping me along the way.”

Joe March received an A* in Mathematics, an A in History and a B in Further Mathematics and has secured a place at St Andrew’s University to study Computer Science.

He said: “I’ve wanted to study Computer Science for a long time so I’m really happy.”

Emma Dean achieved three Distinctions in Business, Health and Social Care and Travel and Tourism and will go on to study Midwifery at the University of West London.

She said: “I’ve wanted to become a midwife since I was in Year 10 so this is the realisation of my dreams.”

Amy Loakes earned a Distinction* in Health and Social Care, a Distinction in Travel and Tourism and a C in English Literature and will go on to study English and Education Studies at the University of Northampton.

She said: “I’m so happy and relieved to have got these results because they mean I can go on to study to become a teacher.”

Joshua Cresswell received an A in PE, a B in Biology and a C in Chemistry and will study Physiotherapy at the University of Leicester.

He said: “I’ve wanted to study Physiotherapy for about four years now so I am ecstatic.

“When I finish my degree I would like to work in the NHS and then take up a specialism and possibly do some work in sports physiotherapy.”

He said: “I couldn’t sleep last night I was so nervous. I’m so happy to have got into university. In the future I hope to work on satellites.”

Sally O’Keeffe received a Distinction in Business, a C in Art and a D in English and will go to De Montfort University in Leicester to study Arts and Festival Events Management next year.

She said: “I’ve worked really hard this year so I feel very proud of myself.”

Eleanor Jones received three A-Levels, including a B in Media which has earned her a place on the Media Production course at De Montfort University.

She said: “I’m really happy. When I finish my degree I would like to work in advertising and website design.”

This year’s AS results are also amongst the best in the Academy’s history and feature outstanding performances from our Year 12 students in a number of subjects, including Business, English Literature, History, Media, Travel and Tourism and Sport.

Year 12 student Ben Warner received four As in English Literature, Mathematics, Further Mathematics and Physics in his AS examinations.

He said: “I’m shocked and speechless. I worked hard but I never expected to do this well.”

Fellow Year 12 student Harry Tomkins received three As in Chemistry, Physics and Mathematics and a B in Geography.

He said: “I am ecstatic. The hard work has paid off but I know I will still need to put in a lot of work next year in Year 13.”

Year 12 student Alex Lawless received an A in English Literature, two Bs in French and History and a C in Mathematics.

She said: “It is such a jump from GCSEs to the Sixth Form so I didn’t know how well I would have done.

“I hope to improve my grades further next year and would like to apply to Oxbridge.”