Corby Business Academy is celebrating yet another set of positive GCSE results. 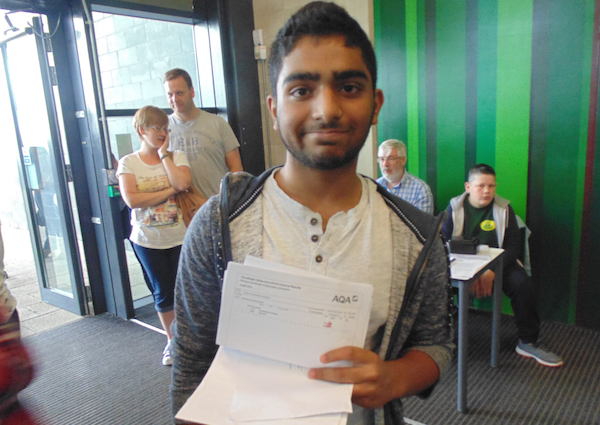 Corby Business Academy is celebrating yet another set of positive GCSE results.

Today's results have revealed impressive pass rates of 90 per cent plus in a wide variety of subjects, including Chemistry, Biology, Physics, Sport, Textiles, Cambridge National Science and IGCSE English Language.

The results have also shown that the Academy's value added figures have risen which means our students have made significant progress between the Key Stage 2 results they arrived at secondary school with in Year 7 and the GCSE results they have received today in Year 11.

Executive Principal John Henrys said: "We are very pleased with the progress our students have made since their arrival here in Year 7.

"We have had fantastic results in a variety of subjects, including Business, Dance, Science, Textiles and Travel and Tourism.

"We have also had a substantial number of students achieving the top grades of A* and A in their subjects.

"These results will allow a significant number of our students to go on to access A-Level studies at the Academy and we look forward to working with them in the Sixth Form."

Nayan Kumar received four A*s in History, Biology, Physics and Citizenship, four As in ICT, Additional Mathematics, Chemistry and English, three Bs in Statistics, Business and French and a C in Art and Design.

He said: “I’m happy with my results and in particular my grade for Mathematics.

Karla Downs received an A* in Physics, As in nine subjects, including Business, and a B in French.

She said: “I worked really hard for my exams so I’m thrilled with these results. I’m particularly proud of my A* in Physics.

“I want to study Psychology, Sociology, Mathematics and Biology next year.”

Abby Reilly received As in nine subjects, including Business, Physics and History, a B and a C.

She said: “I’m shocked and excited. I’m particularly happy about my A in Physics.

“I want to study English Literature, Philosophy, Biology and History next year.”

Samantha Loveday earned an A* in Geography as well as seven As, a B and a C.

She said: “I’m very pleased with my results. I’m particularly happy with my Geography result because it was better than I expected.”

She said: “I didn’t expect to do as well as this and I’m really happy.

“I intend to study Maths, Biology, Geography and Psychology next year.”

He said: “I’m very happy with my As in Biology, Chemistry and Physics. I hope to study Mathematics, Further Mathematics, Physics and Business next year.”

She said: “I feel amazing. I didn’t expect to do this well.

Liusadh Sutherland received two As, six Bs and a C.

She said: “I’m really happy because these results mean I can stay on at CBA for the Sixth Form.

“I plan to study Psychology, English Literature, Biology and Chemistry next year.”

Chloe Harvey received two As in Music and History as well as five Bs and five Cs.

She said: “I’m so excited. I’m thrilled with my result for Music because in two parts of the examination I received 100 per cent.

“Next year I will study four subjects, including Music, History and Physics.”

Siona Layton-Matthews received an A* in Art and Design, two As in English Language and History and six Bs.

She said: “I’ve been worried about getting my results so it is a big relief to finally get them today.

Thomas Chenery received Bs in Science, History, Mathematics and Citizenship, a Merit in Business and a C in English.

He said: “I got a B in Science overall but in Physics I got an A* and a A which I’m really pleased about. I wasn’t expecting to do so well and it makes all the hard work worthwhile.”

Regina Diwan’s results included a Distinction* in Science, Bs in English and Mathematics, a Merit in BTEC Health and Social Care, a Pass in BTEC Business and a C in History.

She said: “I’m surprised at how well I’ve done and I’m very happy.”