Chefs raise more than £1,300 for charity 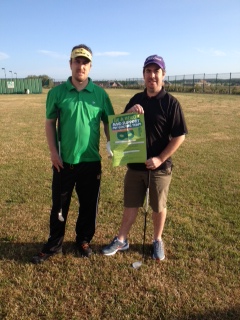 During the challenge CBA Restaurant Manager Chris Lapsley and Chef Steven Allder walked more than 20 miles and played 72 holes of golf across four golf courses in just one day.

The pair, along with two other friends, started their fundraiser at 4.45am at Orton Meadows Golf Course in Peterborough and finished it at Priors Hall Golf Club in Corby at 7.45pm – nearly two hours ahead of schedule.

Mr Lapsley said: “It was a fantastic day.  We were all shattered by the end of it but it was definitely worth it.

“The hardest point for me was the third course – that was when I hit the wall. Fortunately we all struggled at different points so when one of us was having difficulties the other three picked him up.

“People even donated money to us as we were taking part in the challenge. One golfer at Priors Hall donated £60 when he heard what we were doing.

“We would like to thank everyone who supported us.”