Ben is honoured at national awards

One of our inspirational Sixth Formers has been highly commended in the first ever Student of the Year Awards. 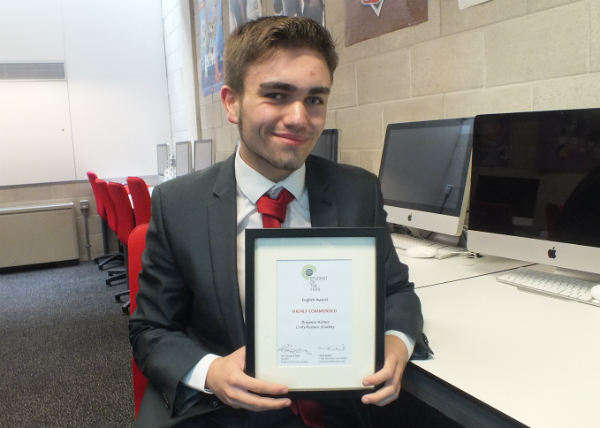 One of our inspirational Sixth Formers has been highly commended in the first ever Student of the Year Awards.

Year 13 student Ben Warner was honoured in the English category of the national awards ceremony which was hosted by BBC journalist and broadcaster John Humphrys in London.

Ben was the only student from Northamptonshire to be honoured at the awards which were founded by the first winner of The Apprentice Tim Campbell MBE and supported by the likes of Education Secretary Nicky Morgan and the Mayor of London Boris Johnson.

Ben said: “I’ve always put in the effort at school and have tried to help other students in class and it feels really good to know that that has been noticed.

“It was a real shock to hear John Humphrys read my name out – I wasn’t expecting to do so well. It was overwhelming.

“This experience has given me a real boost and I will continue to work hard during my final year at school.

“English has always been my favourite subject and I hope to study it at university.

CBA Head of Sixth Form Samantha Anderson said: “All staff are incredibly proud of Ben’s achievement, which is very much deserved.

“He is a credit to himself, his family and the whole Academy.”

English teacher Lisa Dawson, who attended the ceremony, added: “Ben is an incredibly hardworking student who has a wonderful enthusiasm for English Literature. His continuous development and progress stems from his remarkable work ethic and he is determined to achieve the very best he can in all his subjects.

“His high standards to constantly improve himself and his impeccable personal conduct have provided many younger students across our school with a positive, inspirational role model who is a credit to his community."