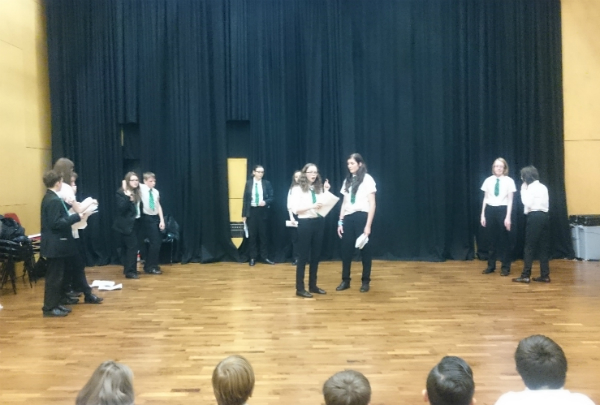 Students from Years 8 to 11 performed a condensed version of Hamlet, which lasted 30 minutes, as part of the Shakespeare Schools Festival at The Core theatre in Corby.

“The students weren’t just reciting the lines – they really understood the meaning of the text.

“It was great to be part of the festival and I’m sure this will have helped the students with their studies of Shakespeare.

“It’s been a valuable experience for the students. They’ve gained more confidence and made new friends with students in different years here and with students from other schools that took part in the festival.

“It also gave them the chance to see the different parts of a professional theatre and the careers which are available.”

Miss Johnston also praised the students for the way they conducted themselves during the festival.

She said: “It was a long day for them. Before the show they took part in a technical rehearsal and a dress rehearsal but they remained focussed throughout.

“I would also like to say a special thank you to Cerys Johns from Year 11 and Kurt Foley from Year 8 who stepped in to take on important roles just a few weeks before the show.

“Having a female Hamlet was one of the many interesting choices that we made which gave the students the opportunity to really explore the characters.”