Our Unit Football Team has won its first ever league match at the end of an 11-goal thriller. 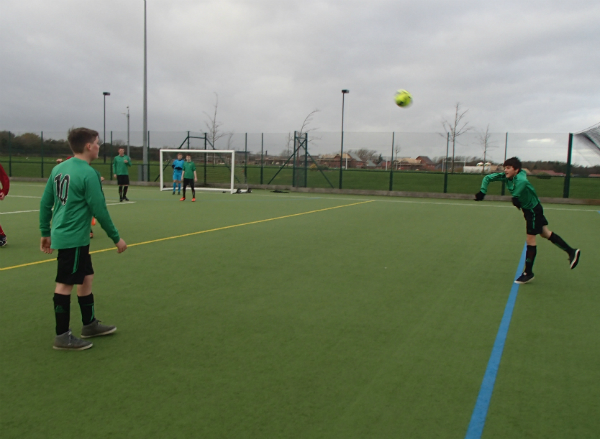 Our Unit Football Team has won its first ever league match at the end of an 11-goal thriller.

Our Key Stage 4 players secured their first victory in the SEN Football League during a tight match against Friars Academy from Wellingborough which ended 6-5.

CBA Football Coach Richard White said: “We are the least experienced team in the league but our players have come such a long way since we started playing football.

“Our boys performed very well and it was great to see them with big smiles on their faces. They were thrilled to come back and share their good news with their friends here at CBA.

“Throughout the match they showed good teamwork and sportsmanship towards Friars.

“The team from Friars is really good and we would like to say a massive thank you to them for a great match.”

Our Key Stage 3 and 4 footballers from Unit also had the opportunity to take part in the Inclusive Football Tournament which was run by Northampton Town Football Club at Abbeyfield School in Northampton.

Mr White said: “It was the third time that we had taken part in the tournament and it’s always a tough event because there are some great teams there.

“We didn’t win any matches but we had some great performances, including a stunning performance by Kian Wolfendon who scored a lot of goals.

“I’d like to thank the organisers from Northampton Town Football Club and the staff members from CBA who supported our students.”

Year 9 player James Stuart played in goal at the tournament.

He said: “It was very difficult but I really enjoyed it and I was really happy when I stopped goals.”

Year 8 player Marley Price played up front and continued playing after he was injured.

He said: “I helped to set up a few goals which made me happy. I thought we were good at passing and we are getting better all the time.”