Our annual Christmas Tree competition has been won by the amazing team in AMID. 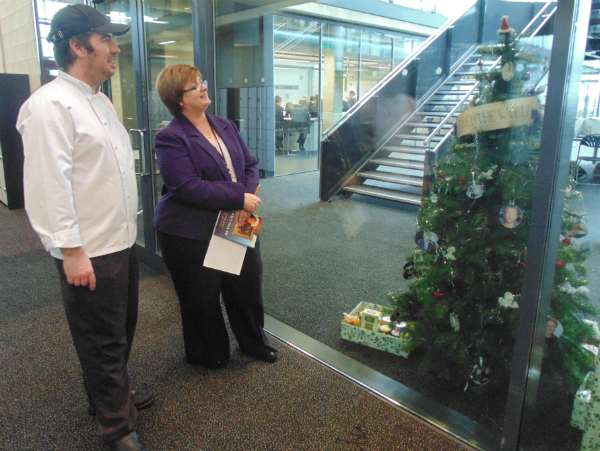 Our annual Christmas Tree competition has been won by the amazing team in AMID.

The theme of this year’s contest was Christmas Songs and the judges were very impressed by AMID’s creative interpretation of Fairytale of New York.

The runner-up was COMMS whose display turned into a crime scene when their tree disappeared in tribute to the song How the Grinch Stole Christmas.

Fortunately, the COMMS tree turned up again shortly after the judging finished.

Judge Chris Lapsley said: “All the tree displays were very good this year but the trees in AMID and COMMS stood out because they were a bit different and were that little bit more creative.”

“AMID won for creating the Best Tree and COMMS came second because they came up with a fantastic idea.

“It was also great to see how AMID and MAIT linked their trees to their subjects.

“I would like to congratulate all the faculties. This is the eighth year that we have run this competition and the students and staff continue to astound us with their different interpretations of Christmas.”

PNS and UNIT both chose Feed the World as their inspiration, BHE chose The Christmas Alphabet and MAIT’s Christmas tree was part tree, part Darth Vader for their version of What Can You Get A Wookie for Christmas.

Mr Lapsley and Mrs Duggan also had an added treat in BHE when staff members sang The Christmas Alphabet to them.

To see more of our Christmas Trees click here