The Queen’s personal representative in Northamptonshire has praised our cadets. 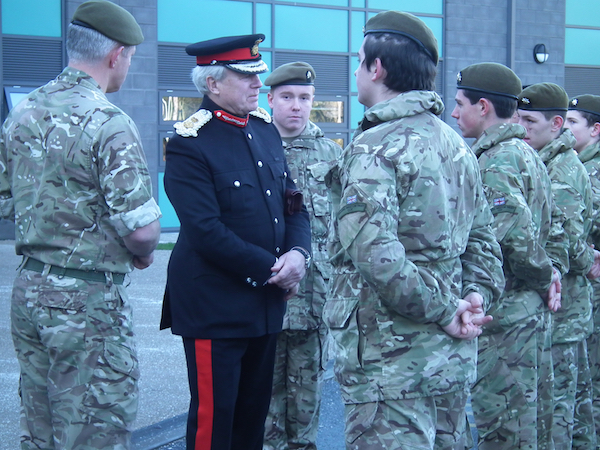 The Queen’s personal representative in Northamptonshire has praised our cadets.

The Lord-Lieutenant of Northamptonshire, David Laing, met with the Brooke Weston Trust Combined Cadet Force recruits, including cadets from our school, during their latest training meeting on Friday.

The parade and the salute for the Lord-Lieutenant were led by Corporal Sonny Dalziel who is a Year 11 student at CBA.

He said: “I am impressed by the confidence you have displayed when you have been speaking to me today.

“I can tell from the way you have presented yourselves that you are all going to go a long way.

“It has been a great privilege to be here.”

The Lord-Lieutenant, who was accompanied on the visit by the Chairman of the Northamptonshire Reserve Forces and Cadets Assocation Lieutenant Colonel Robert Blomfield, also spoke highly of the opportunities that are offered to students through the BWT Combined Cadet Force programme.

He added it was important that such opportunities are offered alongside academic studies in schools.

The BWT Combined Cadet Force is in its second year, but in its first year of operating independently, after being under the supervision and guidance of Oundle School in its establishing year.

It now operates as part of the Royal Anglian Regiment and is made up of 50 cadets selected from the Trust’s five secondary schools: Corby Business Academy, Corby Technical School, Brooke Weston Academy, Kettering Science Academy and Thomas Clarkson Academy.

The Contingent Commander for the BWT CCF, Captain Matthew Isherwood, said: “To be part of the BWT CCF is seen as a great privilege.

“Each year we are going to get bigger and better and we will be able to offer more and more.”

The cadets currently meet for two hours of training each week and learn various field crafts and skills such as navigation, parade marches, drills and air rifle control.

Future expansion plans for the Trust’s CCF include the possibility of establishing a Sixth Form cadet operation which will help Sixth formers to gain valuable leadership and management skills for their future careers.

Current cadets have also shown an interest in applying for the Defence College in Leicestershire, Welbeck to carry on with their military training further.