Wizards have a spellbinding time at Harry Potter Party 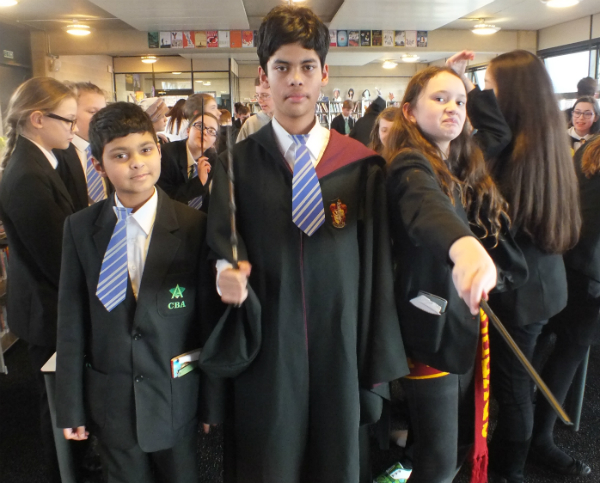 About 70 students from our Academy, Corby Technical School and Brooke Weston Academy attended the party which was staged in our Library.

Students dressed up as their favourite characters, took part in a variety of Harry Potter-themed quizzes and games and enjoyed tasty treats inspired by the stories.

“The students all mixed well together and some of them put a lot of effort into their costumes.

“There was a lovely atmosphere and it was a great opportunity for the Trust schools to get together and enable the students to meet others from outside their school who they have things in common with. We will do as much as we can to arrange other events so that the different schools can get together.

“A huge thank you goes to our Assistant Librarian Christina Mangin who organised this event.

“She is so imaginative and her attention to detail was fantastic. She spent hours at home making posters, decorations, treats, Harry Potter ties and Prefect badges for the students. We are very lucky to have her.

“We would also like to thank the students who stayed behind after the party to help us tidy up the Library.”

The theme of this year’s national Harry Potter Book Night was A Night of Spells.

All the students were divided into the different houses and they each had to choose a Prefect and a House Elf who spent the party working towards achieving their freedom.

The students took part in a Standard Spell Class where they could show off their knowledge of the books.

During the Intermediate Spell Class the students created their own potions from a variety of ingredients, decided what they would be called, what they would do and what side effects the potions would have. They got extra house points if anyone from their team was prepared to try the potion.

The students also had the chance to go on a Horcrux Hunt to find things relating to their houses which were hidden around the Library.

The competition was won by Hufflepuff and afterwards the students enjoyed a Harry Potter-inspired Grand Feast and sweets from the legendary wizarding sweets shop Honeydukes including Bertie Bott’s Every Flavour Beans and chocolate frogs.