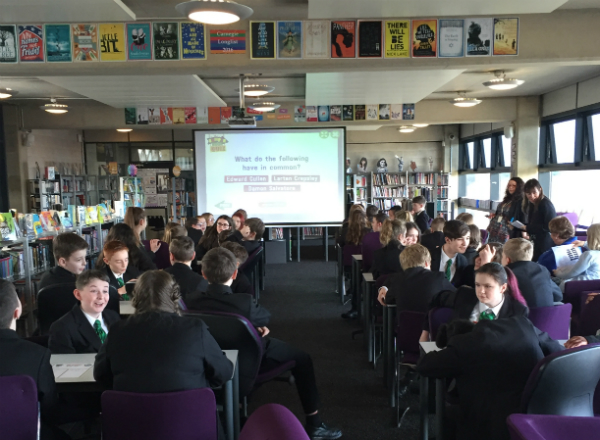 More than 6,000 people from across the UK and Ireland took part in the Bumper Book Quiz World Record on February 22 and smashed the previous record of 2,679 people taking part in a book quiz at the same time.

Among the participants were nearly 50 students from our Academy who were thrilled when Guinness World Record experts declared it was a new World Record yesterday on World Book Day.

CBA Librarian Amy McKay said: “It’s fantastic that our students are able to say they are World Record breakers.

“We were so pleased to have been involved in an event that schools around the country were taking part in.

“The quiz itself was very tough and we were very impressed by our students’ knowledge.”

The quiz was divided into different age groups so readers of all ages could join in.

Each level included guest video appearances from a variety of authors, including Charlie Higson, Francesca Simon and Julian Clary.

During World Book Day our Library also gave away hundreds of book tokens and 400 books and students were challenged to identify pictures of staff hiding behind book covers in our Book Face competition.

Amy said: “Our students were very excited about World Book Day and lots of them were coming into the Library to get their vouchers and books.

“Our Book Face competition also went really well. Throughout breakfast and lunchtime we had lots of students trying to work out who all the staff members were. We hope to reveal the winners of the competition on Monday.”

Throughout the day students also had the chance to read Anthony Horowitz’s The Hitchhiker which had been divided into three sections.

Assistant Director of English Rebecca Horridge said: “The reading went really well and we had a lot of positive feedback from students.

“The younger students in particular were eager to find out what was going to happen in the next instalment of the story.

“It’s also been really nice for the students to read with teachers who are not English teachers. Reading is very important across the Academy – not just in English lessons.”

(Our students are pictured taking part in the World Record attempt)