Representatives from Victim Support gave our Sixth Formers an assembly about how they can volunteer to help the organisation. 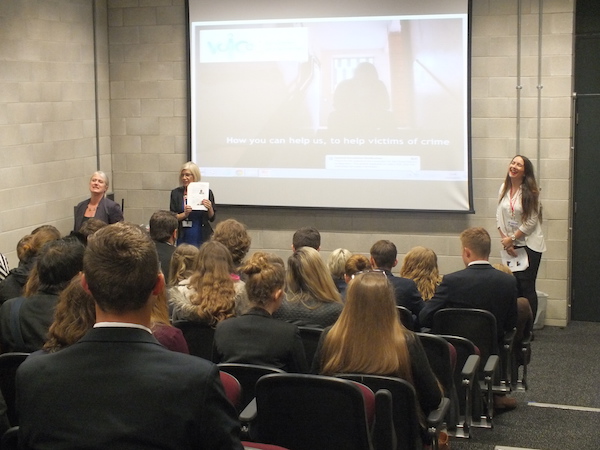 Representatives from Victim Support gave our Sixth Formers an assembly about how they can volunteer to help the organisation.

Bernie Reid and Karolina Zalewska from Victim Support talked to the students about the work of the organisation which supports anyone affected by crime.

They told the students about the volunteering opportunities that are available to them within the organisation and explained how they could contact Victim Support if they ever needed its help.

Miss Zalewska is a former CBA student who is a Criminology and Psychology graduate studying for a Masters in Sociology whilst working as a Volunteer Manager at Victim Support.

She said: “We take about 470 calls a week on a range of issues and we work with other organisations in the county to help victims to get restorative justice.

“As a volunteer you might offer support to victims face-to-face or over the telephone or you might be involved in other activities such as fundraising.

“It’s amazing to know that by volunteering for us you are changing people’s lives for the better.”

CBA Head of Sixth Form Sam Anderson said: “The reason we wanted to invite Victim Support to talk to our Sixth Formers was two-fold.

“We wanted to encourage students to consider the volunteering opportunities that are available there and we wanted to make them aware of the organisation in case they ever need its support.

“Several students have already expressed an interest in volunteering, including students who are interested in studying psychology at university."

One of the organisation’s volunteers is former CBA Head Girl Megan Hogg who is studying psychology at university.

Volunteers must be 18 or over and have been DBS checked.

To find out more click here or email Karolina.zalewska@victimsupport.org.uk