The Director of the Grassroots Out campaign visited Corby Business Academy this afternoon to make a passionate plea for people to vote Leave in tomorrow’s EU Referendum. 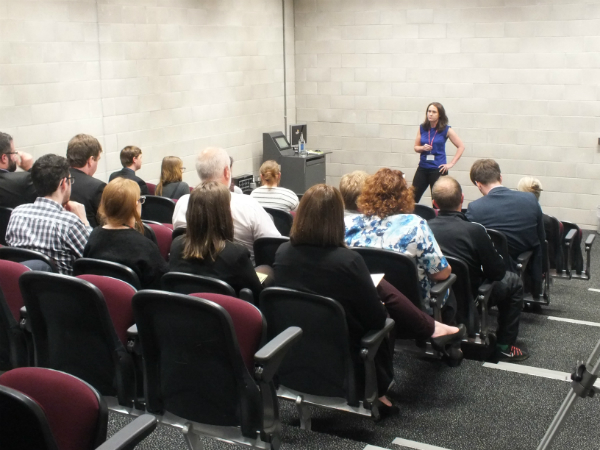 The Director of the Grassroots Out campaign visited Corby Business Academy this afternoon to make a passionate plea for people to vote Leave in tomorrow’s EU Referendum.

District councillor and former Conservative parliamentary candidate Helen Harrison addressed an audience of Sixth Formers and staff in the second of our presentations ahead of the vote.

She told onlookers that for her the vote was primarily about democracy and sovereignty.

She said: “This is the most important vote we are likely to have in our lifetime and every single vote will count.

“This referendum is about democracy. We joined a union that was about trade but gradually, and deliberately, over the past 40 years it has become a political union. It’s a nation building exercise.

“The fact is the EU takes our power away from us.  Huge areas of law are made in the EU, not in this country, and the problem is if we don’t like it we can’t do anything about it.

“The EU works the opposite way around to the UK. Here laws are generated by an elected House of Commons and revised by an unelected House of Lords. In the EU the unelected commission devises the laws and regulations and the elected parliament just revises them.

She said she did not trust the EU adding it had broken its own rules to bail out countries like Greece in a bid to keep the union going.

She criticised the EU for having a paternalistic attitude towards its member states and argued that when Greece had voted in an anti-austerity government the EU had forced the country to continue living in austerity.

In addition Mrs Harrison added the EU had no trade deals with the world’s other largest economies because of the difficulty in getting agreement from its 28 member states.

She added: “We can trade with the EU, we don’t have to be in a political union with them to do that.

“The UK is the EU’s largest market. We buy £70bn a year more from them than they do from us. EU countries will still want to trade with us. If they don’t they will force themselves into another recession.”

Mrs Harrison also took questions from the audience about immigration, the NHS and the possible short-term and long-term impact of leaving the EU.

The Brooke Weston Trust does not align itself with any political viewpoint but has invited Remain and Leave campaigners to CBA to enable staff and students to make informed decisions which are right for them as individuals.

Mrs Harrison’s visit followed a visit by comedian and Stand Up For Europe campaigner Eddie Izzard who was championing the Remain cause.