Some of our brightest young female mathematicians and scientists were given the chance to take part in a programme run by Network Rail and Carillion plc. 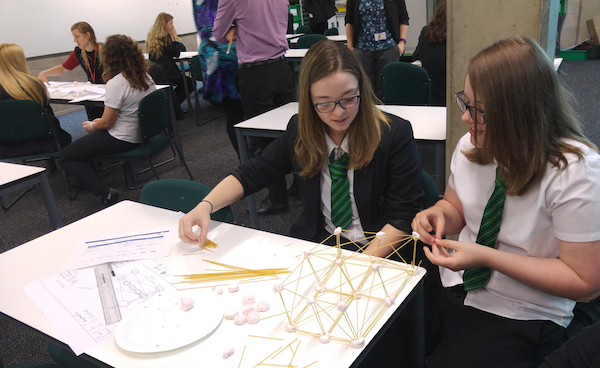 Some of our brightest young female mathematicians and scientists were given the chance to take part in a programme run by Network Rail and Carillion plc.

The companies visited our Academy to work with a group of 45 Year 9 students on an exciting STEM (Science, Technology, Engineering and Mathematics) project.

The students were challenged to come up with designs and models of a railway bridge which had to be made to certain specifications and within a specific budget.

CBA Director of Computer Science Kamruz Zaman said: “Network Rail and Carillion put together this project because they want to encourage more girls to become interested in engineering careers.

“They brought in a range of different people including managers, engineers, graduates and undergraduates.

“The girls had to make models of bridges from spaghetti and marshmallows and then they had to test the bridge by seeing how much weight it could hold.

“They were challenged to create a bridge which could hold 100gm of weight for 20 seconds.

“Our students did very well to build a bridge on a par with the bridge built by the graduates.

“Our students engaged well with the visitors and got a lot out of the experience.

“The visitors were very complimentary about us and we are very proud of our students’ achievements.

“The event was a success and we hope to work with these organisations again in the future.”