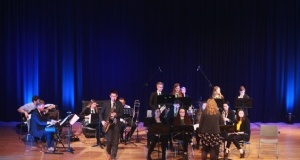 The first event of the year will see the Big Band perform at the National Festival of Music for Youth regional competition on 18th March at Northampton School for Girls. The Junior Concert Band and the Senior Concert Band will also be combining at the event to showcase a programme of ‘Earth Dance’ and ‘Palladiotake'. All the ensembles from the music department will then perform in the Oundle Festival of Music and Drama on Thursday 30th March.

In summer the music department have a busy schedule of events. The senior Concert Band and Big Band have been invited to perform at a concert in Northampton as part of the NMPAT’s Summer Concert Series. The event takes place on Sunday 21st May and features groups from the County Music Service. In July, the Academy is holding their own summer concert featuring a number of primary schools and a guest soloist. The Academy will then be taking part in the National Festival of Music for Youths final if they qualify from the regional series of Music for Youth.

Director of Music Mr Clive Wears said ‘If we do not qualify then it is likely that we will organise an aspirational trip with a group of students to listen to the finals at Symphony Hall, Birmingham. This may also involve a performance in one of the fringe events.’

The music department is also extremely fortunate to be invited to perform with the Senior Concert Band at the Oundle International Festival on Sunday 9th July. The last event of the year is the Academy’s tour to Holland departing on Wednesday 12th July. The tour is now fully booked and the company organising the trip are in the final stages of booking the excursions and concerts. We hope this will included around three concerts to take part in, sightseeing in Amsterdam and The Hague and a trip to the theme park. *

Mr Wears said ‘In order for these events to be successful it is imperative that students attend rehearsals as and when required. Corby Business Academy believes it is important that students take part in trips and events as this adds to their understanding of the curriculum and the world they live in helping to them develop as young people and young adults.’

For more details of the events including dates, time and transport information please click here and you will be able to view the letter sent out to parents and carers.

*Should your son / daughter still wish to attend please contact the Finance Department at Corby Business Academy who will put them on a waiting list.