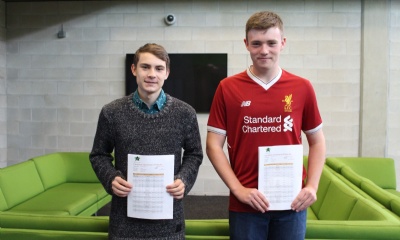 CBA students celebrate as they achieve grade 9s, after becoming the first year of students to sit exams under the rigorous new GCSE grading system.

The new system currently operates in three subjects (English literature, English language and mathematics) and was designed to make it harder for students to achieve top grades. Despite this, students showed impressive performances in English language with more students achieving grade 9s than the national expected outcomes of 3%.

Louie Anderson is the Academy’s top performing student, achieving an impressive three grade 9s in English literature, language and mathematics and As in Biology, chemistry, history, music, physics, and Spanish.

Louie is now going to stay at the Academy to study A levels in mathematics, further mathematics, physics and chemistry.

He said: ‘I am really pleased with my results and am particularly surprised with my grade 9s in English.’

‘I worked hard at home and often revised. I did lots of past papers which I think really help.’

She said: ‘ I am really pleased with my results and achieved better than I thought I would in English, I didn’t expect to get any grade 9s.’

Associate Principal Janina Taylor said  ‘We are proud of all our students who have performed well on the new grading system. There have been some good individual performances from the students and the results show the hard work and dedication of both the students and staff.’