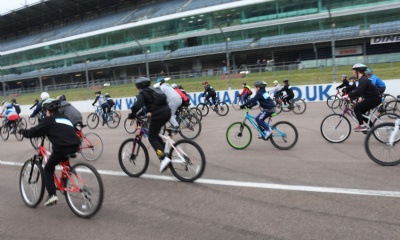 This week, as part of Corby Business Academy’s ‘Ambition for All’ month, over 60 students and staff cycled around Rockingham Motor Speedway’s Oval Track to raise money for Prostate Cancer UK and support two of our staff members, Mr Wears and Ms Johnson, who will be taking part in Prostate Cancer UK’s Grand De’part classic later this year.

Each student was tasked with gaining sponsorship money and cycling as many laps as they could around the track in the space of two hours.

The Sporting Events Executive, Jermayne, from Prostate Cancer UK also attended the event and cheered students on, participularly as this is the first school in the country to work in collaboration with the charity for a sporting event. He said ‘prostate cancer is the most common cancer in men in the UK and 1 in 8 men will get prostate cancer at some point in their lives.

‘What the students and staff at the Academy have done today is amazing and the money they have raised will make a huge difference and allow us to fund vital research.’

Associate Principal Janina Taylor said ‘It was a fantastic day! The students had some much fun and were incredibly pleased to be raising money for such a worth while cause.

'The event has created such a lovely atmosphere around the Academy and it was brilliant to see staff, students and families all come together to support the event. I am full of pride for what they have achieved. They have demonstrated our Academy value of not being afraid to fly.’

Well done to all the students and staff that took part and to those who have supported the event and donated.