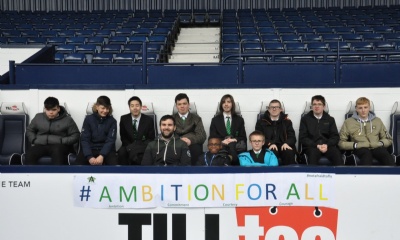 The trip was part of CBA's Ambition For All month, and was aimed at inspiring the football team and rewarding them for all their hard work.

The tour guide at the stadium showed the students around areas usually off limits to the public and told them many memorable facts about the stadium and the game.

Student Kye said: ‘This is the first time I have visited a stadium and it was very big. When I grow up I’d like to be a professional footballer and play on pitch that size.’

In the afternoon, the students then visited the sealife centre and saw a variety of underwater wildlife such as seahorses, turtles and a many types of fish.

Students Dylan said: ‘I found the trip really exciting. It was the first time I’ve visited the Sealife centre and I was able to see lots of different fish.’

Mr White said: ‘The students had a fantastic time on the trip and have all been asking when we can go again. The students learnt so much about history of the stadium and all the different names and facts about the sealife. It was a very memorable day, which exposed the students to many new things as lots of them had never visited a stadium or sealife centre before.

‘The students behaviour and commitment throughout the whole day was impeccable and they represented both of us and the entire Academy in an extremely positive light.

‘Thank you to everyone who made the trip possible.’