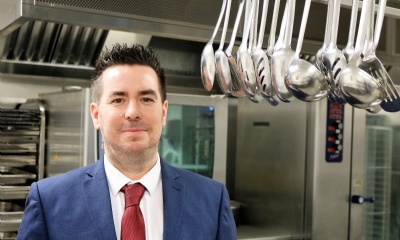 Chris Lapsley is looking forward to taking up his new role as Trust senior catering manager, heading up the kitchens across all ten of our schools. He plans to standardise food handling and preparation techniques, suppliers, ingredients, menus and portion control so that everyone will have the same quality and quantity of food, regardless of their location.

Chris  joined Corby Business Academy as Head Chef in 2010 and was subsequently given responsibility for the catering at four more schools; Kettering Science Academy, Corby Technical School and Gretton and Compass Primary Schools. He has developed standardised working practices at those which will be introduced across the rest of the Trust kitchens.

He said: ‘Each school had a different way of doing things so I streamlined what we were doing. Now everything runs off the same template and we use the same suppliers. I am hoping to introduce a secondary and primary menu with winter and summer options, so there will always be a good choice that is evolving.’

Chris has had wide experience in the catering industry, working in a variety of settings, most notably at Rockingham Speedway where he was head chef with a team of 25, preparing thousands of meals a day.

He said: ‘I always wanted to be a chef and I bring passion to the role. I love food and the industry I am in. I want the students to come in and have great food. There is a good buzz in our restaurants and they go away happy and ready to learn.’

The Trust kitchens produce thousands of meals a week and, with many of the schools offering breakfast and lunch, standardising procedures, menus and ingredients is a crucial task. Chris has produced a booklet of standard recipes and production methods, as well as a Hazard Analysis Critical Control Point plan (HACCP) to ensure that food is stored, prepared and served in the safest way possible: ‘Every point is controlled from the temperature of delivery, fridge and oven to the gloves and aprons that the chefs use. We put a control point in at every stage to eliminate potential contamination. By introducing standard ingredients, recipes and preparation methods we will get savings across the board as, rather than negotiating prices for three sites, I will be negotiating for ten.’

There are certain dishes, such as lasagne and chicken tikka masala that are so popular that they will never be taken off the menu. However Chris spends a lot of time developing recipes to update them:

‘One of the adaptations is a Mexican nacho lasagne, which is chilli mince with nacho cheese sauce in the pasta and crushed nachos on top. It is amazing and is actually nicer than lasagne. I and the head chefs will get together, look at what is popular and see what dishes we need to adapt or discard.

‘Spending 18 months running the catering for five schools has given me the knowledge and the stepping stone up into this new role. It has been great working for the Trust, and it also means that, as well as catering, we can involve students in competitions such as the Brooke Weston Trust Bake-Off. There is a lot of scope to develop the role and the catering operation. I am looking forward to starting in September, working alongside the chefs and catering teams in each school to provide the best food, value and service possible.’