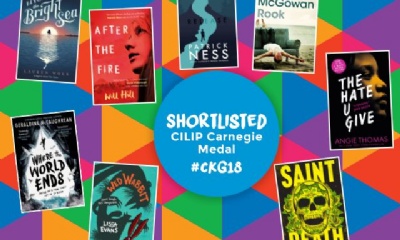 A group of students from Key Stage 3 are once again, taking part in the Carnegie Shadowing scheme this year. The scheme allows the students to ‘shadow’ the judging process of the CILIP Book Awards as part of the reading for pleasure initiative.

Since the scheme launched at Easter, the students have been encouraged to start reading the books on the shortlist before the overall winner will be announced in June. During their weekly meetings, run by Head Librarian Amy McKay (who is also the national co-ordinator for the awards), the students take part in group discussions and activities.

Amy McKay said: ‘We have taken part in the scheme every since the Academy opened in 2008. I think the awards are one of the best things in the library world because the students are encouraged to read books they wouldn’t normally pick up and they are exposed to so many genres. The books are all aimed at the students’ age group and are nominated due to their literary excellence, so they are brilliant books for the students to read.

‘We always look at the Kate Greenway picture books nomination as I think these are also incredibly important as we live in a visual world. Sometimes when we don’t know how to express something through words, we are able to through art.’

The students will also take part in the Brooke Weston Trust Carnegie event on the day the winner is announce allowing the students to meet others who are taking part from the other Trust schools.