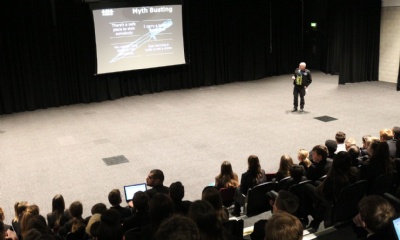 During the assembly, PCSO Steve Coles announced this year theme as ‘Knife Crime’ and spoke about the increased amount of knife crimes in the county. Steve then went on to explain the implications and myths of carrying a knife before speaking about this year’s competition and the skills the students could gain from taking part.

The competition tasks students from secondary schools across Northamptonshire to use a business like approach to develop creative ways to tackle a social problem by creating a product or service.

To conclude the assembly PSCO Steve Coles presented last year’s team with £500 to develop their idea. The team, made up of Annika, Freya and Julia, also each received a £10 Love to Shop Voucher. The theme was ‘Road Safety’ and the group went all the way to the finals where they were awarded third place for their reflective jacket idea.

Students competing in the competition this year will now have set times to work in groups on developing and design their project or service, which they will present to peers and teachers. One group will then go through to represent the Academy at the semi-finals, held at Northamptonshire Police Headquarters. Here they will go up against 30 other schools from the county and will pitch their ideas in front of a group of judges. The students will also get to visit the dog unit and fire service.

If the team successfully make it through to the finals, they will go up against seven other school and showcase their idea and business plan in a ‘Dragons Den format for the chance to win £2,000 to develop their project. The event will be held at The Castle Theatre in Wellingborough and the judging panel will consist of business, public sector and community leaders.

PSCO Steve Coles said: ‘The concept of the competition was about moving away from coming into schools, deliver a piece of work and assembly that described a problem that essential young people are a part of. We wanted to turn this around and invite the young people to be part of the solution instead. If students feel they are part of solution and have worked on and researched the topic then not only does it increase their understanding of the problem but they are much less likely to actually become part of the activity.

‘We started the project around 9 years ago with the aim of reducing arson attacks. It was a prominent problem in Northamptonshire and a wheelie bin fire led to the death of young boy in Wellingborough. The effect of the campaign had a massive effect and we realised the impact the Northamptonshire Country Schools Challenge could have.

‘Last year was the first time ever that the judges awarded a cash prize to anything other than first place. They were so impressed with the ideas for second and third place that they found additional money to support the projects. What is also particularly impressive about the team from Corby Business Academy is that the competition is open to Key Stage 3 and most schools put forward Year 9 teams however the Corby Business Academy team was made up of Year 7s.’

‘This year, we have chosen ‘Knife Crime’ as a topic as you only have to turn on TV and you hear a story on the news about a knife crime. Although figures are a lot lower in Northamptonshire compared to other larger counties, they are still increasing. It’s a problem that the students can easily understand and I am really looking forward to seeing what the students’ solutions look like.’

Vice Principal Mr Brennan said: ‘Congratulations to the group of girls who represented the Academy last year. It’s a fabulous achievement to be awarded third place and I am really looking forward to seeing Year 7s ideas for this year’s topic of ‘Knife Crime’.