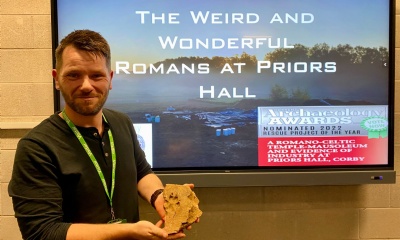 On Thursday 9th December 2021, Year 7 were treated to a talk about the people who lived in Priors Hall 2000 years ago.

On Thursday 9th December 2021, Year 7 were treated to a talk about the people who lived in Priors Hall 2000 years ago.

The talk on the Weird and Wonderful Romans was funded by Urban & Civic who also helped make the original excavations possible.

Oxford Archaeology East’s excavation of a Romano-Celtic temple-mausoleum and evidence for late Roman industrial activity has been nominated for Rescue Project of the Year in the prestigious 2022 Current Archaeology Awards. This was because at Priors Hall archaeologists found:

Students were enthralled by Paddy Lambert’s charismatic and entertaining tales of Roman life from Cardea, Roman goddess of door handles to the story of the Mastiff puppy who bounced over one of the tiles that was being made and left a footprint.

A whole world of hidden lives was revealed before foundations of the 21st century was laid over these forgotten peoples. Students could have listened for hours. 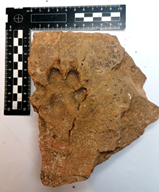