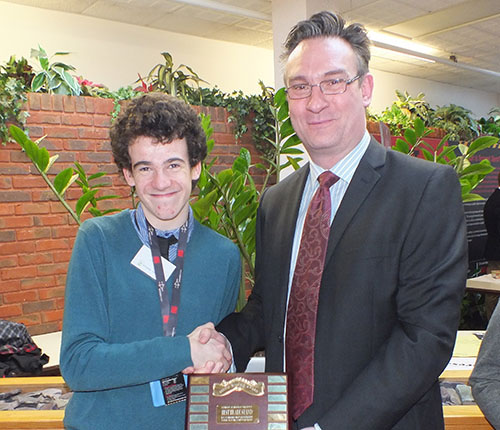 Happy Hands, which is run by Sixth Form students in our DSP, and CBA Young Enterprise firm Kraftees both set up stands to sell their products to RS staff in their canteen at lunchtime on Wednesday.

The two firms were selling alongside two teams from Lodge Park Academy and a team from Brooke Weston Academy.

Judge Fred Knowles from RS Components spoke to each of the five companies during the trade fair and gave feedback on each team.

Mr Knowles said he chose Happy Hands to win the Bernie Howells Best Trade Stand Award because their stand “really communicated what the company is about”.

He said he was impressed with the way the team had reused items to make new products, such as their use of old teacups to create candles.

Mr Knowles said he was impressed with Kraftees’ flexibility, as they had sold various products since setting up.

He said: “What came through loud and clear for me is they knew where profitability comes from.”