Two CBA students will spend a day at the University of Birmingham after being named winners in the Dux Awards. 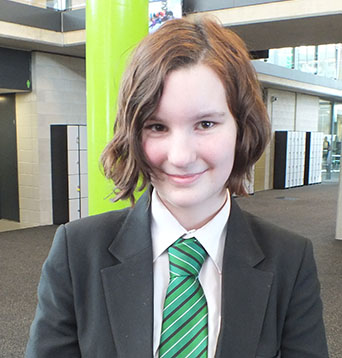 Two CBA students will spend a day at the University of Birmingham after being named winners in the Dux Awards.

The Awards recognise and reward high performing pupils in Year 9 and encourage higher aspiration by giving winning students the chance to visit a Russell Group university.

Year 9 students Kimberley Samuels-Hammond (pictured above) and Keelan Robertson will visit the university with teacher Claire Howsam in June.

Kimberley said: “I’ve visited Oxford and Cambridge universities before. I think it will be really good to go to the University of Birmingham because it will give me a wider perspective on university life. I am really looking forward to it.

Keelan said: “I’m not sure what to expect but I am looking forward to seeing what university is like.”

Miss Howsam said: “It should be really interesting. The two CBA students who got the chance to go last year really enjoyed it because they got to mix with other students of their age and meet university students who were there to help.”