Students who join our Sixth Form next year will  have the opportunity to buy subsidised Google Chromebooks under a new scheme. 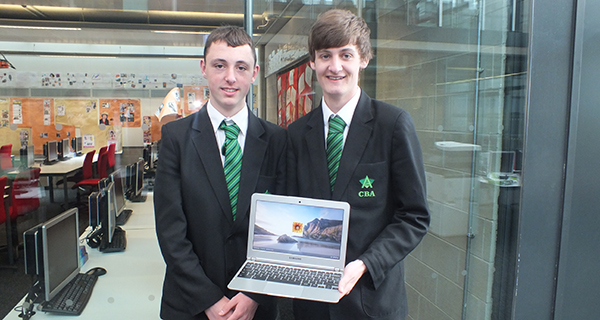 Students who join our Sixth Form next year will  have the opportunity to buy subsidised Google Chromebooks under a new scheme.

The e-learning scheme was put together after CBA identified that independent learning was a barrier to learning in the Sixth Form.

As a result the Academy is committing £10,000 to subsidising Chromebooks for our new Year 12 students.

In addition, CBA will be spending £300,000 on developing the network infrastructure to support this use of mobile devices around the Academy building.

Students who are currently in Year 11 who will be joining our Sixth Form in September will all be given the chance to buy a mobile device under this new scheme.

Principal John Henrys said: “There are a lot of mobile devices on the market. We have investigated a range of devices and after consultation with the e-learning foundation, parents and students, we have decided to offer the Google Chromebook.

“This is a robust and cost-effective mobile device which will support the independent learning of Sixth Form students.”

Under the scheme, parents will be asked to pay £100 towards the device. CBA will be contributing over 50% of the cost to ensure that the devices can be offered at a significantly reduced price.

There will be different payment options available, and parents will have the option to pay in installments.

Students eligible for the Sixth Form Bursary will be able to use part of this to cover the cost of their Chromebook.

CBA will be maintaining the devices and will provide technical support.

A parent information evening will be held to give more information about the laptop scheme.

Parents and students can contact Head of Sixth Form Kim Isaksen with any queries by emailing kisaksen@corbybusinessacademy.org