Author and illustrator Levi Pinfold visited us at CBA this week, two days before being named winner of the 2013 Greenaway Medal. 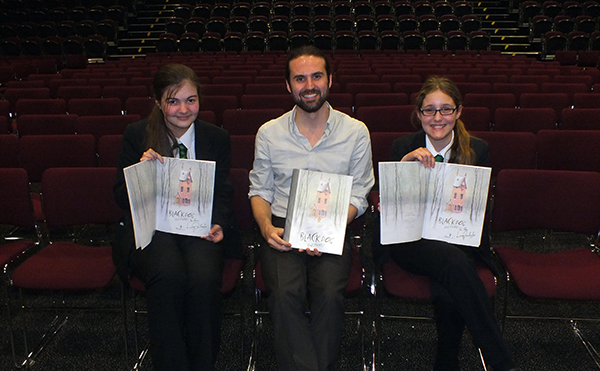 Author and illustrator Levi Pinfold visited us at CBA this week, two days before being named winner of the 2013 Greenaway Medal.

Levi was nominated for the award for his second picture book ‘Black Dog’ and beat seven other shortlisted titles to be named the winner at a ceremony in London on Wednesday.

When he came in to CBA on Monday, Levi spoke to Year 8 students in the theatre first.

He told them all about ‘Black Dog’, which sees a little girl called Small Hope facing fear head-on in the form of a monstrous giant black dog.

Levi explained how he came up with the idea for the book after hearing of the legend of the black dog and reading more about it.

He also told students about how he creates the images, which take him about three weeks each and are made from paint he mixes himself using egg yolk and pigment, known as egg tempera.

After the talk he signed copies of ‘Black Dog’ for students.

In the afternoon he worked with students in an art class and after school he held a question and answer session in the library.

Levi said: “The day was absolutely wonderful. I really enjoyed talking to the kids, who were really active and intelligent, they asked really good questions.”

Librarian Amy McKay said: “It was a really positive day, Levi got involved in so many different activities and met lots of students, who were really interested.

“’Black Dog’ is a picture book, which shows reading and literacy doesn’t have to be about sitting down and reading prose, it can be a lot more than that.”