An enterprising group of Sixth Form students have received an award for their business skills at a trade fair. 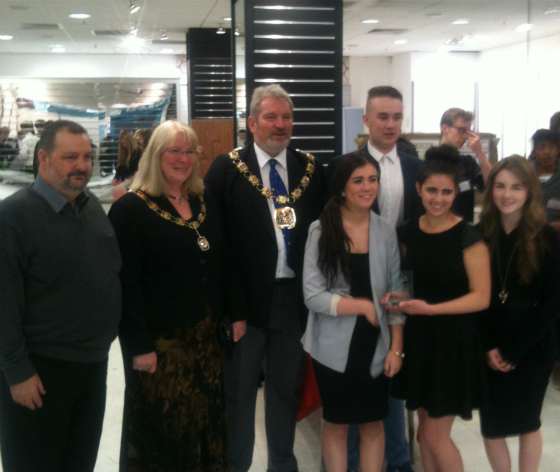 An enterprising group of Sixth Form students have received an award for their business skills at a trade fair.
Our Young Enterprise company Signature beat off stiff competition from 10 other schools to win the award for Best Sales and Marketing at the Young Enterprise Trade Fair for the Wellingborough and Rockingham area.
Signature was at the fair to promote and sell its new product - personalized and customized face flannel gift sets.
Young Enterprise link teacher Alexandra Allan said: “Their knowledge of costs, gross profit, targets and effective sales techniques was very evident. These elements are key ingredients in running a successful company.”
Signature managing director Diana Olahova said: “The event went really well and we made friends with students from some of the other schools.
“We received lots of interest on the day and took several orders for our product.
“When they announced that we had won the award we were shocked because we were up against a lot of other schools, including schools from Wellingborough where the fair was being held.
“We’re really proud to have done so well.”
Signature received its award from the Mayor of Wellingborough, Cllr Graham Lawman.
Customers can choose from a range of pink, purple and white flannel gift sets which have been wrapped up to look like Christmas crackers.
The students will sell the customized face flannels, which have been embroidered with general messages of good will, at several trade fairs over the next few months.
The next two trade fairs Signature will attend are the Small Business Fair in Corby town centre on Saturday 7th December and the Northamptonshire Trade Fair at the Grosvenor Centre in Northampton between 10am to 4pm on Sunday 8th December.
CBA staff and students can also order flannels which can be personalized with people’s names. Samples are available to view in BL7 and the product costs £4.99.
To order personalized flannels email 28146@corbybusinessacademy.org
Anyone who places an order for a gift set before Christmas will be entered into a raffle.