Boccia contest is a big hit

Students with special educational needs from across Northamptonshire descended on CBA to take part in a Boccia competition. 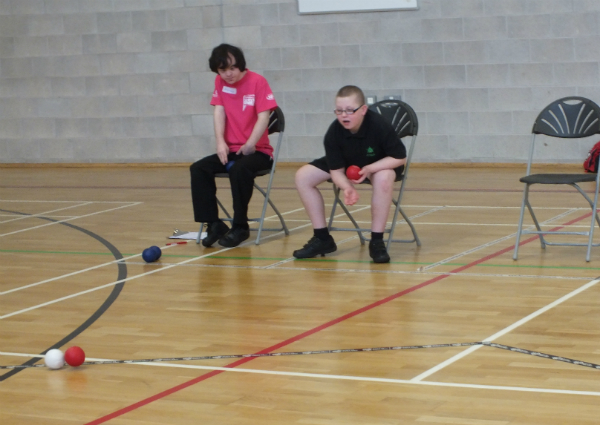 Students with special educational needs from across Northamptonshire descended on CBA to take part in a Boccia competition.

Boccia is a sport which is similar to bowls and the competition was held as part of Project Ability.

The contest was run with help from CBA students who were acting as young leaders and the competitors performed under the watchful eye of a representative from Boccia England.

“About 50 students from secondary and primary schools have taken part in this competition. Of the 21 primary pupils who came along there were 18 who were taking part in a competition for the first time.

“This competition has given them the opportunity to represent their schools. It gives them a sense of worth and belonging and the chance to showcase their talents.

“Some of the students had never played before today. Their progression from the first match to end of the competition has been outstanding.”

Mr Peleszok was also full of praise for the Academy’s young leaders.

He said: “These young leaders have been excellent. They did six hours of training and have been working hard for six hours today.

“It’s been nice to see a mix of Sixth Formers and Year 10 students acting as young leaders and I hope some of them will go on to be part of the Northamptonshire Schools Games.”

Head of PE at Friars School in Wellingborough, Rhian Turnbull, was heavily involved in the competition.

She said: “It has been a really close competition. In the primary contest alone we had three teams which were vying for third place.”

Boccia England junior development officer Mary Johnson was also on hand at the event to see how the competitors and young leaders were getting on.

She said: “The event has been really good and the sports hall at the Academy is a great facility.

“The young leaders are great and the level of competition has been pretty good. There are some really good players here who are showing a lot of potential.”

CBA Year 10 student Nicky Binder was one of the young leaders at the contest.

He said: “It’s been a lot of fun and I found the training easy.

“The event has gone really well and the students have enjoyed themselves.

“I’ve really enjoyed helping other people to play the game.”