Students hit the headlines and airwaves with new CD

Our students have been busy promoting their new CD just days ahead of its launch. 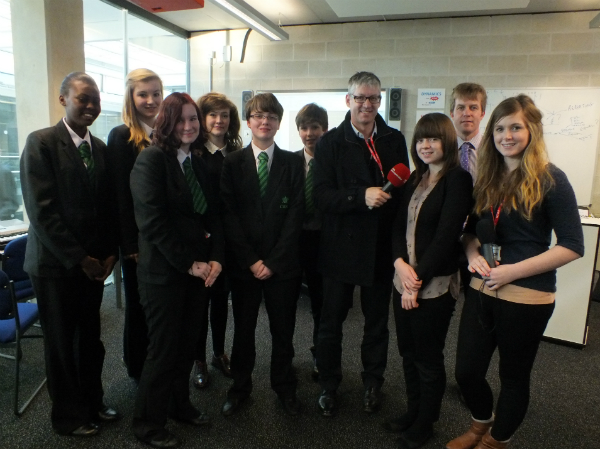 Our students have been busy promoting their new CD just days ahead of its launch.

Our young musicians and designers, who created Music Means Business, have been promoting their CD with help from our friends at the Northamptonshire Telegraph, BBC Radio Northampton and Corby Radio.

They have been photographed and interviewed about the experience of performing on, producing and designing the CD which goes on sale on Monday 16th December.

Director of Music, Clive Wears, was among those who were interviewed by journalists.

He said: “We’re really grateful to the Northamptonshire Telegraph, BBC Radio Northampton and Corby Radio for all their support.

“The performances from our young musicians and singers on this CD are really outstanding. They should all be incredibly proud of themselves for what they have managed to achieve.

"It is a great CD and is the perfect present for any music lover this Christmas."

It was recorded at the Academy with the support of World of Sound and producer Adam Goldsmith.

It took more than five months to make and features a variety of popular tracks, including Stand By Me, You’ve Got the Love, Fields of Gold, Someone Like You, Ain’t No Mountain and Encanto.

The CD cover was also designed by a small group of media students led by sixth formers Megan Hogg and Eleanor Jones.

Eleanor, who would like to become a designer, said: “It will be great to get the CD out there so people can see what we have done.”

Music Means Business costs £5 and will be available from the Academy’s main reception.

The Northamptonshire Telegraph article about the CD is in this week’s edition of the newspaper.

The broadcasts about the CD will be aired by BBC Radio Northampton and Corby Radio during the next few days.

The broadcasts are listed as episodes 4 and 5 on the Academy's website under the Podcast section. To listen to them click here