Students appear with Chris Evans on BBC One 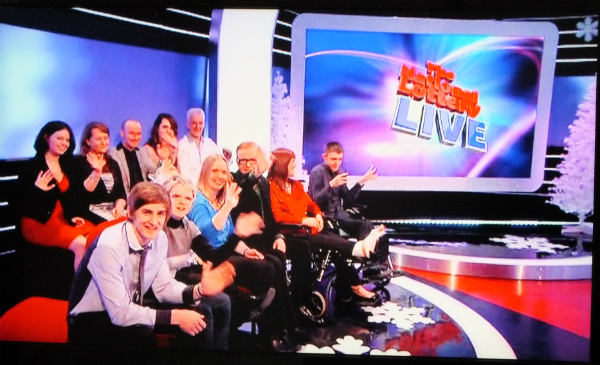 They featured heavily in Saturday’s programme during a piece about how more than £43,000 of lottery funding had benefitted Adrenaline Alley in Corby.

Members of the Academy’s Unit helped Adrenaline Alley secure the funding from the People’s Millions in 2010 and regularly use its new disabled facilities.

Special needs teacher Nikki Clark, who appeared in a short film shown during the programme, said: “The students love going to Adrenaline Alley. It gives them opportunities to develop their skills in a fun and exciting environment.

Harry and Samantha and CBA Unit director Claire Robinson went along to take part in the live show at Pinewood Studios with members of Adrenaline Alley.

They made a big hit with presenter Chris Evans.

Nikki added: “It was a totally new experience for Harry and Samantha and they both took it in their stride.

“Harry soon relaxed and enjoyed chatting to Chris and started his own catch phrase - 'back to you Chris'. Chris in return decided to wish everyone a ‘Harry Christmas’.”

Mr Evans was happy to answer questions, sign autographs and have photographs taken.

He ended the show with the words ‘Back to you Harry’.

The programme has prompted families of the students involved to get in touch with the Academy.

Samantha Gibson’s grandmother Avril said: “I must say how much I enjoyed the lottery programme and to see my little granddaughter there – I am so proud of her.”