Our students have recorded a moving poem which is being used by charities to combat domestic abuse. 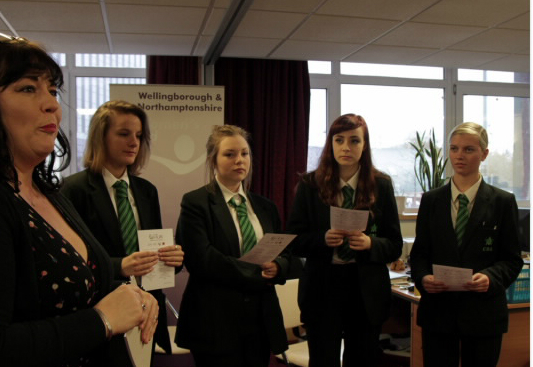 Our students have recorded a moving poem which is being used by charities to combat domestic abuse.

Drama students Eloise Robertson, Shannon Butler, Amy Moore and Heather Phillips produced a recording of the poem ‘Flowers’ by Paulette Kelly, which is told from the perspective of a domestic violence victim, for the Sunflower Centre, Northampton Women’s Aid and Wellingborough and East Northants Women’s Aid.

The three charities can use the recording, along with a picture montage created by a Brooke Weston student, at events to promote awareness of domestic abuse.

The students also gave a live recital of the poem at the opening of a one stop shop for domestic violence victims seeking help called The Hub in Corby at the end of November.

Our Safer Schools Officer, PCSO Alex Franklin, discovered the poem in a pack of lesson plans and wanted to share it with our students.

He said: “I thought it would be good if some pupils recorded the poem to bring the problem to the attention of our students as some of them may be suffering from it and not realise there is a place they can go to seek help.

“I asked the Academy’s drama department for the names of a number of girls who would be good for the project. After a talk with the girls, we organized a day when we could meet during lunch and they recorded it in pretty much one take which caught the exact tone of the poem.

“I played the recording to Corby Borough Council and it was decided that the poem would be used at the grand opening of the Hub and broadcast by BBC Radio Northampton.

“The girls did a fantastic job of recording the poem. It has been given to the charities at the Hub to use whenever they need to promote their services.”

The Hub is in George Street, Corby, and is supported by Corby Borough Council, Northamptonshire Rape Incest Crisis Centre, Victim Support  and Serenity.

Its offices are manned from 10am from 4pm every week day, except Wednesdays when there is phone contact only.

Below is a copy of the poem

I Got Flowers Today - by Paulette Kelly

i got flowers today.
it wasn't my birthday or any other special day.
we had our first argument last night,
and he said a lot of cruel things that really hurt me.
i know he is sorry and didn't mean the things he said.
because he sent me flowers today.

i got flowers today.
it wasn't our anniversary any other special day.
last night, he threw me into a wall and started to choke me.
it seemed like a nightmare.
i couldn't believe it was real.
i woke up this morning sore and bruised all over.
i know he must be sorry.
because he sent me flowers today.

i got flowers today,
and it wasn't Mother's Day or any other special day.
last night, he beat me up again.
and it was much worse than all the other times.
if i leave him, what will i do?
how will i take care of my kids?
what about money?
i'm afraid of him and scared to leave.
but i know he must be sorry.
because he sent me flowers today.

i got flowers today.
today was a very special day.
it was the day of my funeral.
last night, he finally killed me.
he beat me to death.
if only i had gathered enough courage and strength to leave him,
i would not have gotten flowers... today.