A talented teenage singer is a step closer to realising her dream of securing a recording contract. 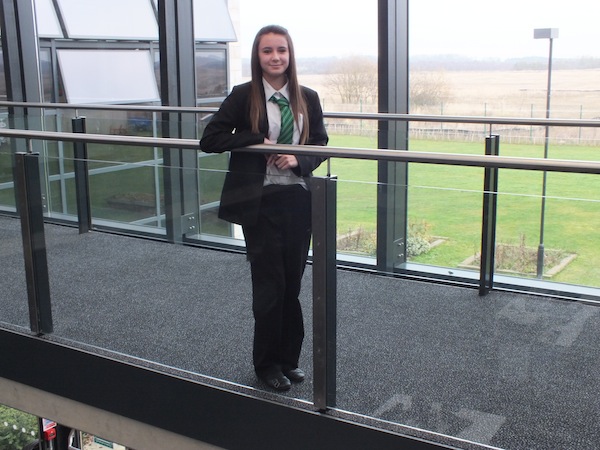 A talented teenage singer is a step closer to realising her dream of securing a recording contract.
Year 9 Corby Business Academy student Chloe Paul will perform in front of hundreds of people, music moguls and celebrity judges at the national final of Open Mic UK at Birmingham's NEC this month.
She secured the coveted place in the finals after winning over judges with a moving performance of Wings by Birdy at the regional finals in Milton Keynes.
She said: "The regional finals were really exciting. There were lots of people from the music industry there including people from the BBC and Warner Studios.
"I wasn't sure whether I would make it through because there were so many great performers there.I was so happy when they called out my name and told me I was in the final.
"I'm really excited about the finals because the last heat was so much fun. They've told us if we're good enough we could get a recording contract.
"I would love to get a contract because singing means everything to me."
Chloe has not decided yet which song she will perform at the event but she is not nervous about the thought of performing at the NEC.
She said: "I've performed at the NEC before and it's a great place to sing. It's really big and it's got a massive stage."
Chloe also performed in the first round of Britain's Got Talent and sings a solo on the academy's new CD, Music Means Business.
The Open Mic UK Grand Final will be held on Saturday 18th January and will feature performances from competition finalists and guest acts.
For further information and tickets visit http://www.openmicuk.co.uk/singing-opportunities

The voting for this competition is open now. To vote for Chloe text open 17 to 86222. Please be aware it will cost you to text.