Dr Who comes to CBA

A corner of the Academy was turned into the home of Dr Who by creative students during Curriculum Day. 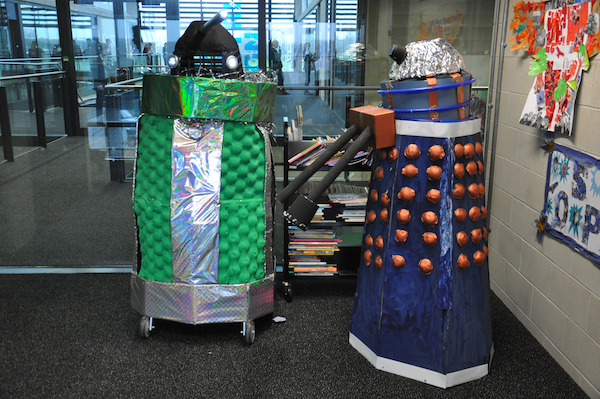 A corner of the Academy was turned into the home of Dr Who by creative students during Curriculum Day.

Students from Unit took part in a Scrapheap Challenge type of event in which they had to recycle materials such as cardboard tubes and boxes and pots  to create Daleks and Dr Who’s robotic dog K-9.

They also transformed the Unit’s sensory room into the Tardis – complete with sound effects – and transformed a figure they had made for a scarecrow competition into Matt Smith’s Doctor.

Unit Director Claire Robinson said: “The students worked really well together on the project and everybody contributed to the task.

“It was a test of their creative and communication skills and they had to organise who would take on the different roles to complete the project.

“The students were proud of what they achieved.”

The task of creating Dr Who’s world was carried out by members of Unit’s three houses.

The sensory room was transformed into the Tardis by the Red Kites, K-9 and one of the Daleks were made by the Ospreys and the other Dalek and the Matt Smith figure were created by the Kestrels.