Our students tackled the weighty question of whether teenagers should be able to vote at 16 with help from BBC journalists. 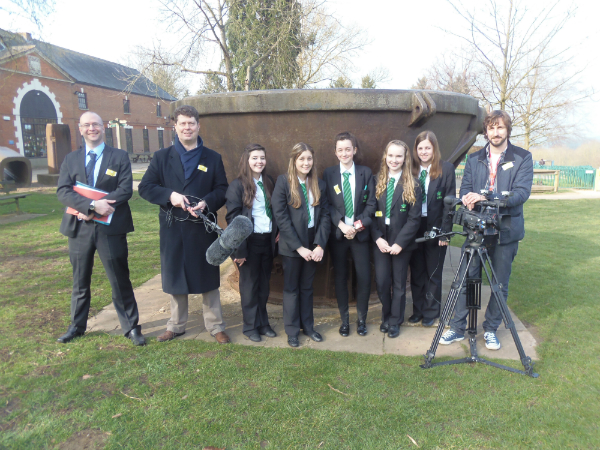 Our students tackled the weighty question of whether teenagers should be able to vote at 16 with help from BBC journalists.

BBC News producer Nick Tarry and camera operator Josh Eve visited our Academy last week to spend time working with a group of Year 9 students on a film about the subject for BBC News School Report.

The students interviewed staff and students for the film which will form part of the coverage put out by the BBC for BBC News School Report day on March 27th.

Mr Tarry, who has been with the BBC for 25 years and has recently been working with BBC News in Iraq and Libya, praised our students for their professionalism.

He said: “The students have been brilliant and have applied themselves 100%. What is even more impressive is in a morning they’ve managed to imbibe some of the technical skills that I’ve taken two-and-a-half decades to learn, including things like recording sound and retaking a shot from different angles.

“I’ve been to several schools recently and of all the students I’ve worked with the students here have been the most involved in the business.”

Mr Eve has worked on BBC News School Report for the past three years and prior to working with the BBC he worked for MTV and Channel 4.

He added: “The students have been absolutely fantastic. They have taken my direction on board really well and they have suggested shots to me which impressed me.

“They are a really lovely bunch of bright students. The way they maintained their concentration levels throughout the shoot is pretty much unprecedented for this project.”

BBC News School Report gives students aged from 11 to 16 in the UK the chance to make their own news reports for a real audience.

With support from BBC staff and partners, teachers help students to develop their journalistic skills to become School Reporters.

During BBC News School Report day the students’ film will be broadcast on the BBC website and will be available to view on television by pressing the red button.

There will also be more coverage of the event on our Academy’s website.

To see pictures from the film shoot click here