A writer who has worked for US studio Miramax, written for several major television shows and published his first novel gave a talk to our students. 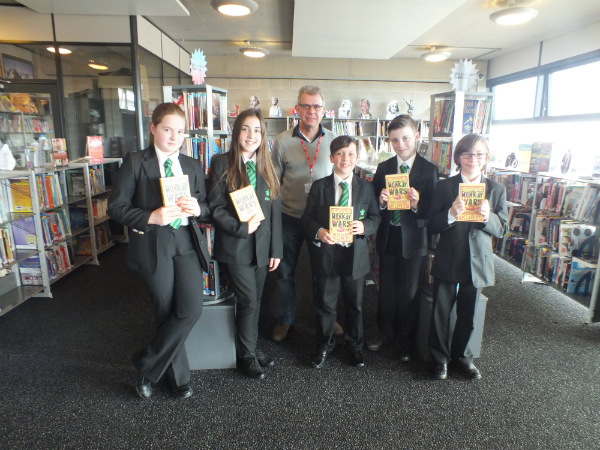 A writer who has worked for US studio Miramax, written for several major television shows and published his first novel gave a talk to our students.
Richard Kurti is one half of scriptwriting duo Kurti and Doyle who have written for the likes of BBC One’s Robin Hood, ITV’s Primeval and Sky One’s adaptation of Terry Pratchett’s novel Going Postal.
Last year Mr Kurti also fulfilled a lifelong ambition to release his first novel – Monkey Wars – which won the Coventry Inspiration Book Awards 2014, has been shortlisted for the UKLA Book Awards and was longlisted for the CILIP Carnegie Medal 2014.
During his visit to CBA, Mr Kurti talked about the publishing industry to about 250 students and ran an exercise which encouraged groups of students to draft exciting opening sentences to stories.
He said: “I wanted to get the students to come up with interesting opening sentences. Even if you’re writing about the most boring thing in the world – like a job application - you should always try to make it interesting.
“The students were really good. We didn’t have one boring opening sentence. I think you can see their writing has been influenced by what they’ve seen on television and online – the pieces they wrote were really punchy.”
Librarian Amy McKay added: “Richard talked about his work as a screenwriter as well as an author.
“What was particularly good was he pulled his talk back to the Academy’s business specialism by talking about the harshness of working in the publishing industry.
“He told the students he had been commissioned to write dozens of films, which he’d been paid for, but they were never made.
“It was interesting for our students to look at writing from the perspective of a business.”
During his visit last week Mr Kurti ran a workshop for Year 7 students, gave a talk to Year 8 students and did a question and answer session with students in Years 7 to 10.
Students from Brooke Weston also attended some of the sessions.
To find out more about Mr Kurti’s work click here