A world record breaking British swimmer who has six Paralympic medals visited our Academy to inspire our young sports leaders. 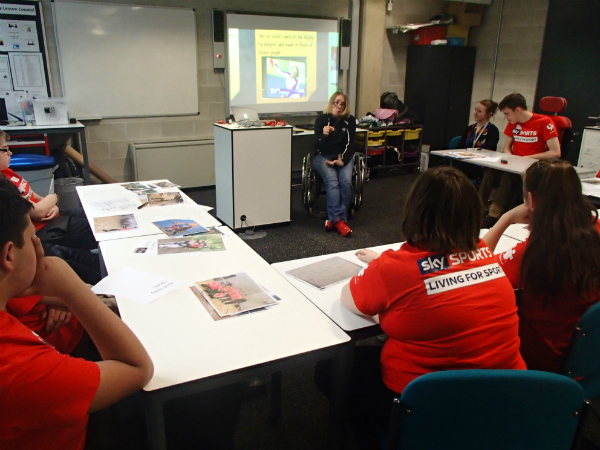 A world record breaking British swimmer who has six Paralympic medals visited our Academy to inspire our young sports leaders.

Fran Williamson visited us at the end of last term to spend time with some of our Unit students who are young leaders in the Paralympic sport of boccia, which is similar to bowls.

She visited us as part of her role as an athlete mentor for Sky Sports Living for Sport.

Unit Director Claire Robinson said: “Fran shared her story with our students and they found it extremely engaging.

“She could not swim until she was 12 because she was scared of water but then she met a Paralympian and decided she wanted to learn.

“By the age of 13 she had broken a world record and wanted to see what more she could do.

“Our students tried on her medals and she explained the steps to success that were really important - mental toughness, hunger to achieve, people skills and breaking barriers.

“In the afternoon our students developed their team work and leadership skills by completing team challenges.

“They also had the opportunity to show Fran photographs of themselves participating in a sporting event that had made them proud.”

He said: “The story about her medals and her swimming was very good. It was very interesting.”

Fellow Sixth Former Harry Hinxman added: “I won’t forget meeting her, she has really inspired me.”

She represented Team GB at the Athens Paralympics in 2004 where she won three silver and a bronze medal and at the Beijing 2008 Paralympics where she defied orders told not to swim because of a bad shoulder injury and won silver and bronze.

She had an operation to fix her shoulder and was told she would never swim again but she continued to compete and the following year she won gold at the World Championships.

She retired from swimming due to injuries in 2011.

In response to questions from our students Miss Willliamson said she did not have the time to come out of retirement because she enjoyed coming to talk to people like them.

She also said the highlight of her career was winning her last championship gold.

(Pictured above are our students with Fran Williamson)